WARNING! I talk about pooping and other bodily functions…. do not read further if you are grossed out by biological processes.

I used to take my toilet for granted also. I’m not talking about those people that do not have in-home toilets for whatever reason. (BTW, more power to you if you’re one of those people. You’re a badass!) I’m talking about just being able to use your toilet in a comfortable manner.

I didn’t realize that this was a thing until the first time I went on our RV toilet. It wasn’t the lack of water that was a problem (we started full-time before it was done freezing, so had no water for the first month so far). I can handle using antifreeze instead of having running water. We had water jugs for drinking from and have been washing dishes and clothing at our friends’ place that we’re parked at. They’re so generous to us!

I also do not have a problem with the shape of the toilet itself. It’s pretty close to a regular toilet, although it’s a bit shorter, both floor to top and back to front. It’s usable, even though petite. 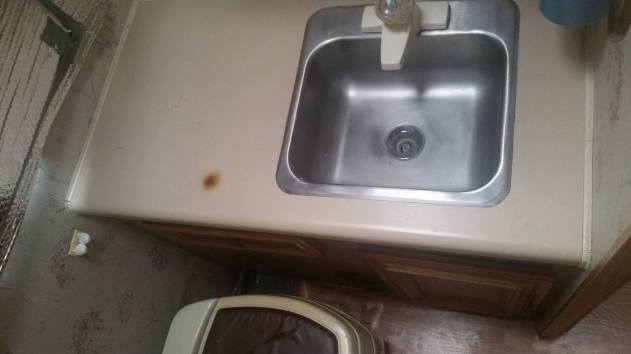 What really has been irking me (and I found out Jeremy as well) is the inability to take care of the “aftercare”. Wiping was impossible. The reason: the sink cabinet was WAY too close to the toilet and bathroom wall. We are big people, so our legs pressed on the cabinet and the wall when just sitting, much less wiping afterward.

This changed the “routine” a lot! First, add a little antifreeze to the bowl and move the jug out of the way so you can sit down. Then, sit and wiggle enough to be able to “go” in the toilet. Next, wiggle a little so you don’t drip when you stand at a half squat to try to wipe. Throw toilet paper in garbage (we don’t want to change to RV toilet paper, so that has to be where it goes). Close lid and flush.

I DID NOT like the half standing squat that was necessary. I still felt like I couldn’t get clean. And when “that time of the month” came around… forget about it!! I kept waiting to go at the gas station down the street and empty my menstrual cup there. (If you want more information about what the heck I’m talking about, please please please, let me know!! I’m passionate about this thing.) Feeling clean during my period was not even an option after using the toilet. I just showered double that week.

Rain prevented Jeremy from working on the engine on Saturday morning. Lucky us; he’s a handy guy. So, we decided to renovate the bathroom. I know that sounds like a huge undertaking to you sticks & bricks dwellers, but an RV is much less involved. It is especially so because we didn’t want to change the wall coverings or the toilet. All we wanted to do was take the cabinet out and move the sink higher and closer to the window. 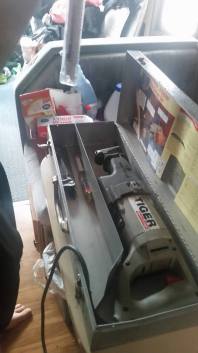 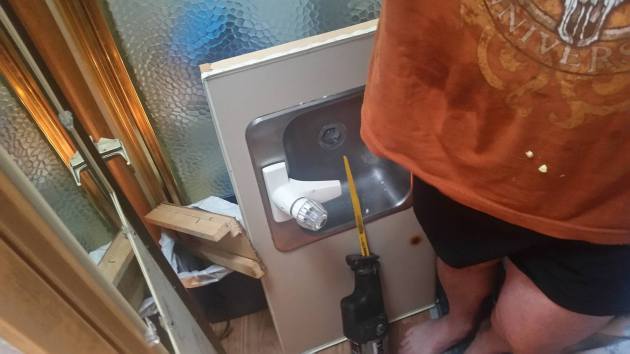 Between a pair of drills and a saws-all, Jeremy removed the counter, cut the cabinet in half, and cut the counter in half. He ended up spending time under the cabinet to remove the counter, so it made for some fun pictures. Once we had done that, we noticed that there was still quite a bit of restriction when seated from the cabinet. So, we’ve decided on a fabric covering for the pipes and “storage items” instead of the wooden cabinet.

I even got to do some work with the power tools! He let me pick where the garbage holder and the towel holder had to go. Now it is so much nicer in our toilet. There’s even some like-new carpet that was under the cabinet. And The Girl Next Door is just a little closer to perfect.

When placing the sink back, we had to make sure that we put it where it would be out of the way. I’m really blessed to have a creative man as my husband. He put the sink back together and did some funny looking yoga to get a working sink into the right spot. He even cleaned up afterward with our little vacuum. We gave the whole area a once over, discarded the refuse, and marveled at how much larger our little bathroom felt without a countertop and cabinet.

It was a good experience to work on the inside for a while instead of just engine work. The Girl Next Door feels more and more like a home every day, thanks to the efforts of Jeremy. I’ve been working so much that I haven’t been able to help much. That was another fun part of this project; we could work on it together. So, remember, not all rain is going to ruin your day, not all projects are long ones, and it’s nice to have a handy husband. Love your family, love your life, and we’ll see you on the road.

We are really happy you stopped to see what we're all about. Feel free to click around a little. Check out our Youtube channel and our Facebook page.

Have a good day and we'll see you on the road.